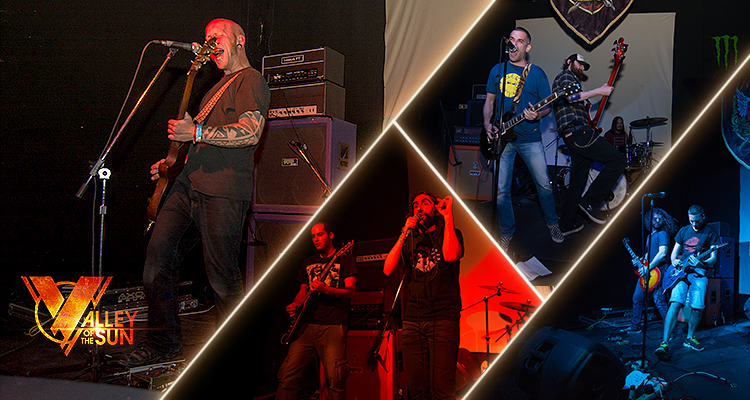 SETLIST: This Is Mine, Thirteen, The Call, I Want You, Home, Wrong Turn What would you do if your bassist lost his papers during a tour and couldn’t follow you?

You keep on rocking. That’s what you do.

More on this subject, further in this report.

Following is a nagging intro paragraph. Whoever is interested only in how the show was is encouraged to skip it.

[Let’s get some facts straight. This mini festival includes a headliner hard (and a bit stoner) rock band from Cincinnati, Ohio and three supporting local groups, all for the price of 10 euros. Seems like a pretty good deal, right? They why in the name of burning hell didn’t we see the venue of Second Skin being full? Maybe it was the heat, maybe the weather forecast of storms (we are still waiting for them), maybe that it was on Thursday and people couldn’t make it, maybe that we are worried about leaving the Eurozone, maybe that I ate a bad pitogyro and got sick, maybe all of the above. What matters is that Valley Of The Sun mentioned the main reason they visited our sunny little country is their fans here, who were constantly spamming for the past 5 years with emails to honour us with their presence. And when that happened the response of these fans was 100+ people showing up… I am personally ashamed about this. Anyway, end of rant; let’s get to the report.]

The live was opened by the upcoming band Burn The Sun from the west suburb of Peristeri. Heavy music and vocals, interrupted by long psychedelic instrumental parts that were unloading the tension, and with swift changes going back to the post-metal verses. Some might find that tiresome when it extends to long tracks like the 12-minute long Desert Flowers. However, this is not a record review, and what matters is that their performance was more than decent taking into consideration their little experience and the few people in the audience. Full of confidence and good mood, they played tracks from their 6 months old EP, as well as fresh ones from their upcoming album. We can’t wait!

It was time for Godsleep to ge ton stage. Having recently released their debut Thousand Sons Of Sleep, they gave a darker feel in the atmosphere with down-tempo, slightly sludge sound. We listened to heavy tracks like This Is Mine, Thirteen and Wrong Turn, along with a psychedelic intermission by The Call. Probably the most warm band towards the audience, since they knew how to make in snap out of their apathy.

SETLIST: This Is Mine, Thirteen, The Call, I Want You, Home, Wrong Turn

The third supporting act was Greeks’ favorite Yellow Devil Sauce. Not much can be said about this energetic trio, except that every single intro of their songs immediately got us pumped and ready to get some beer down our throats. However, in the beginning the sound was not very good so we couldn’t hear the vocals in Greed which was kind of a buzzkill. This didn’t last long, thought, and Yellow Devil Sauce continued undaunted with dirty riffs from the Right Under Your Nose album, proving that they know what a good performance means.

Finally, after 3 hours of standing, it was time for us to see the beloved Valley Of The Sun. As I watched them getting on stage, I could only imagine the disappointment of anybody who was not informed by the social media about the absence of the bassist, due to him losing his papers in Croatia, stranding him in that beautiful country. So, I had adjusted my expectations for the upcoming performance according to the circumstances. Until the first nots of Worn Teeth were played. Suddenly I thought that somebody had put my headphones on me and got prepared to listen to the whole Electric Talos Of The Thunderhawk.

Crystal clear, lout sound emerged from the Green amps, exactly as we were promised. Following was As Earth And Moon and my personal favorite Maya, in which the lack of bass fills and amazing solo might was most noticeable. Frontman Ryan was pretty talkative towards the crowd; he promised us a good show and Aaron was eager to support that promise with his restless presence behind the drums.

At some point a roadie got on stage sticking a printed photo of the missing bassist on an amplifier so “he could always be with us”. It’s obvious that we burst into laughter seeing that move. Next were Gunslinger, The Sleeping Sand, as well as two new songs from the upcoming record which were an exclusivity for the Greek Tour and the Kyuss-influenced Hearts Aflame. While closing with Riding The Duns an unexpected moshpit was created which I couldn’t resist joining (no photos of it ‘cause our photographer, Bill was too busy shoving dudes).

“Well, damn it, you guys! We didn’t expect to see a moshpit in this song, but good for you…”, Ryan shouted. “Thank you very much for coming here tonight. It’s time for us to go back home and record our new album, which are going to play when we return in April.”

We immediately reacted as he was about to get off the stage, making him to play another song. It was clear that we were thirsty for more music, and truth is that I expected a longer set than this one. But as we say here in Greece: “Halali!”, which translates to something like a cheerful “it’s fine by me!”. I can confidently say that I enjoyed lots of heavy tunes right down to my soul in this Full Throttle Jav vol2. See you again in April!